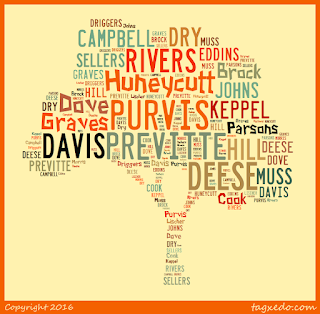 While I haven’t broken down the “Brick Wall” of who the parents of my 2nd great
grandfather William A. Purvis are; I have made progress. In all cases DNA has been the key to braking down these barriers.

For 46 years I have documented every known Purvis in Anson County, NC and Chesterfield County, SC the roots of my Purvis Line. Around  1818 there was a large migration of Purvis’ and other families from Chesterfield County SC, to Georgia, Alabama and Mississippi. A majority, if not all, of those Purvis’ have been added to my database and connected as families.

William James Purvis husband of Millie Cook is the son of James Purvis, Sr. born 1760 and an unknown wife.

The next DNA break came from New Zealand from another Purvis cousin. She reported that she also was related to me through DNA. This week Miss Purvis  informed me that she, her brother, I and a cousin by the surname “JOSEPH” are all  related.  This connection travels back to a male Purvis who left Chesterfield, SC and migrated to Alabama about 1818-1819. He was likely with all the other Purvis’ who migrated during this time period.

His name was Alexander Purvis, born abt 1790 in Chesterfield County, SC to parents currently unknown.  He is reported to have married Elizabeth Johnson, 11 Nov 1819 in Madison County, Alabama. Like so much misinformation this too has not been confirmed. As matter of fact, my research shows Alexander in Chesterfield County, SC and Conecuh County, Alabama and no where else. He did marry Elizabeth as shown in 1850 Census but her surname of Johnson has not been confirmed. Alexander was a farmer.

The 1850 Census shows five children in The Alexander and Elizabeth Purvis household. Six children have been identified.

The children of Alexander and Elizabeth (LNU) Purvis are:

iv. David Purvis was born about 1835 in Conecuh County, Alabama.

v. Elizabeth Purvis was born about 1837 in Conecuh County, Alabama.

The Death dates of both Alexander and Elizabeth (Maiden name unknown) Purvis are unknown. No record of their demise like death notices, obituaries or tombstones have been found.

The “Joseph” surname researcher and I are 5th – 8th Cousin sharing 13 CM of DNA.

Most of the Purvis' who left Chesterfield I know are related but the destruction of records by Gen. Sherman’s  Army makes it almost impossible to reconstruct families in the county.

The New Zealand connection ties us all together back in the original homeland of the Purvis’. We share DNA but her line has never been to America. Miss Purvis ancestors originated in County Tyrone, Northern Ireland.  Her ancestor emigrated on 2 Jan 1841 from Northern Ireland to Port Phillip, Australia.

Posted by Charlie Purvis at 12:05 AM No comments:

Wishing all my subscribers and readers a very special Thanksgiving Day. Thanks to each and every one for your continued support of 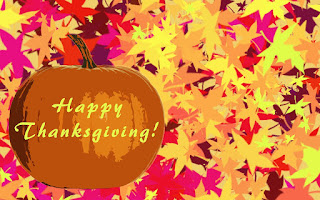 Posted by Charlie Purvis at 10:27 AM No comments: