Sometimes finding the maiden name of a spouse can be a formable task especially when moving back in time. Minor transcription errors in documents and census records also create confusion.

This entire Land Deed has not been transcribed here; only the pertinent portion that identifies the wife of Richard Thompson Powell as Margaret G. Whitaker daughter of William Whitaker. 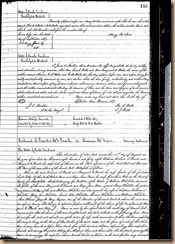 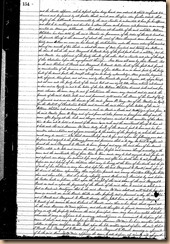 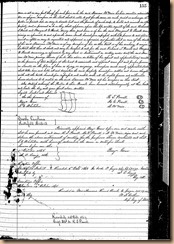 The State of South Carolina.
This indenture of Two Part made this 31st day of August in the year of our Lord one thousand eight hundred and forty eight Between Richard T. Powell and Margaret G. Powell his wife both of Cheraw in the State aforesaid of the First part and Duncan McNair of the same place of the Second Part. Witnefseth as follows:
Whereas the said Richard T. Powell and Margaret G. Powell his wife parties of the first part hereto lately together with Robert Man and Eliza Jane Man his wife filed their Bill in the Court of Equity for Charleston District praying for Petition of the estate of William Whitaker deceased the father of the said Margaret G. Powell and Eliza Jane Man against Mary Whitaker the widow and administratrix of the said William Whitaker and also against his infant children Catherine J. Whitaker Mary Ann Whitaker Sarah Ellen Whitaker Thomas Whitaker and William Whitaker and whereas James W. Gray Esquire one of the Masters of the said Court to whom the said cause was referred among other things to report a proper settlement of the shares of the Complainants Margret G. Powell and Eliza Jane Man in and by his report dated the sixth day of March last recommended that the shares of the said Complainants should be settled on the following terms terms <sic>. To and for the sole and separate use of the wives for life with remainders to their children respectively that may be living at the time of the deaths of the said wives and the ifsue of such of their children as may have died before them (such ifsue of the deceased children representing their respective parents and among themselves taking per stirpes) share and share alike the husband, joining their wives in conveying the respective shares to such Master or Trustees as the said parties may nominate ….


Posted by Charlie Purvis at 12:30 AM No comments: 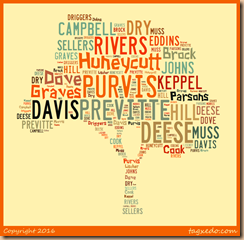 This couple is taking up plenty of my time but I‘m not making very much progress in documenting  their family history.

There are many Peter Kauble/Cauble/Coble in Cabarrus County and so far I have not learned much about the Peter Kauble that married my cousin Christina Dry.

No additional information has been found on this couple past their marriage date with one exception.

Her father in his Will refers to his “Daughter Christine Kimble hundred dollars to the heirs of the body of my son Daniel Dry and then my son John Dry is to draw an equal share of the remainder of my estate with the rest of the legatees already named and all the notes and receipts which I now have against any of my children shall be given up to them and not counted.
I constitute nominate & appoint my worthy friend Peter Kimble & Jacob Miller Sons in Law to be the Executors of this my last will & testament”

On the marriage licensee we have Peter listed as Peter Kauble, but now in 1839, Owen Ulrich Dry, Father and Father-in-law is referring to them as Peter and Christina KIMBLE.

If you have any information on this couple please contact me through this blog.


Original Marriage Licensee for Chesterfield County from 1911 through 1951 are now on file at www.familysearch.org

The marriage licensee are unindexed in folders by year of marriage. There are a total of 541 folders for the years 1911-1951.

The following marriage licensee for Theodore Lucas Melton and Lily Jane Boatwright is typical of the documents you will find on line.


Sadly, the marriage licensees do not name the parents of the intended. In some cases, as in the case of Lily Jane Boatwright, her father gave his consent and wrote it on the bottom of the licensee with a witness.

This is a great addition to FamilySearch; so get into this database and have some fun.

Amanuensis Monday is a genealogy blogging theme. It was started by John Newmark who writes the TransylvanianDutch blog.


His definition of Amanuensis is:
Amanuensis: A person employed to write what another dictates or to copy what has been written by another. 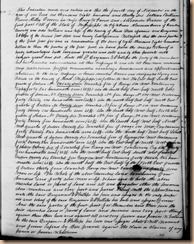 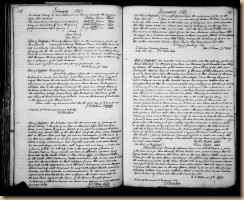 
Witness}
James Purvis}
John Purvis}
State of Mississippi}
Hinds County} Personally appeared before me the undersigned Justice of peace of said county William Purvis and Milly Purvis his wife and severally acknowledged that they signed sealed and delivered the foregoing deed for the use and purpose therein contained and Milly Purvis being by me Examined separate and apart from her husband acknowledged that she signed the same freely as he voluntary act and deed without any fear or compulsion of he said husband.
Given under my hand and seal this 7th day of November 1836.
William C. Thomas JP {seal}

On 4 November 1836 William James Purvis son of James F. Purvis, Ssr. indebted himself to Benjamin E. Phillips for the sum of $10,000+ dollars. At about the same time his father passed away.  I believe the sale of this land mentioned and described in the above deed was to clear up eight thousand dollars of this debt.


Posted by Charlie Purvis at 12:30 AM No comments:

Joseph and Elizabeth Purvis are selling off 40.46/100 acres of land to William H. Davis. 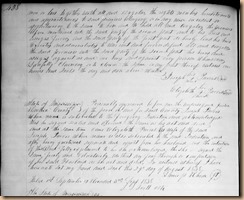 Joseph & Elizabeth Purvis, Deed Book 9, page 427-428
August 1838
This indenture made and Entered into the 29th day of August in the year of Our Lord one thousand eight hundred and thirty eight by and between Joseph Purvis and his wife Elizabeth of the County of Rankin and State of Mississippi of the first part, and William H. Davis of the county of Hinds and state aforesaid of the second part Witnesseth that for and in consideration of the sum Two thousand dollars to us in hand well and truly paid by the said party of the second part the receipt of which we do hereby acknowledge and confessed have this day granted bargained sold and released and by these presents do grant bargain sell and release unto the said party of the second part all that certain tract or parcel of land situate and lying and being in the County of Hinds and State of aforesaid and described as follows, to wit: the south half of East half of North West quarter of Section No. 10 Township No. 4 of Range No. 1 West containing 39 45/100 acres and the S ½ of NE ¼ of Section No. 9 in Township No. 4 of Range No. 1 West containing 40 69/100 acres and S ½ of W ½ of SW ¼ of Section NO. 3 in Township No. 4 Range No. 1 West containing 40 46/100 acres more or less together with all and singular the rights members hereditaments and appurtenances to said premises belonging or in anywise incident or appertaining to the same to have and to hold all and singularly the premises before mentioned unto the said party of the second part and to his heirs and assigns forever and the said party of the first part do hereby bind his heirs Executors, Administrators to warrant and forever defend all and singularly the said premises unto the said party of the second part his heirs and assigns against us and our heirs and against every person whomsoever Lawfully claiming or to claim the said or any part thereof witness our hands and seals the day and date above written.
Joseph X (his mark) Purvis {seal}
Elizabeth X (her mark) Purvis {seal}
State of Mississippi}
Rankin County} Personally appeared before me the undersigned Justice of the Peace in and for said county Joseph Purvis who’s name is subscribed to the foregoing indenture and acknowledged that he signed sealed and delivered the same as his act and deed an d at the same time came Elizabeth Purvis his wife of the said Joseph Purvis whose name is also subscribed to the said Indenture and after being questioned separate and apart from her husband and the intention of this deed fully explained to her she acknowledged that she signed the same fully and voluntarily without any fear threat or compulsion of her said Husband as her act and deed. In witness whereof I have here unto set my hand and seal this 29th day of August 1838. Lewis J. Rhode {JP}
Filed 1st September & Recorded 3rd Sept, 1838
J. J. Scott, Clk.
Joseph Purvis was the son of James F. Purvis. He married Elizabeth Cook abt 1823. The 1840 Census shows that Elizabeth and Joseph had a large family consisting of  4 males and 7 females. Joseph died sometime before 27 April 1842. Elizabeth Cook Purvis died after 1860. 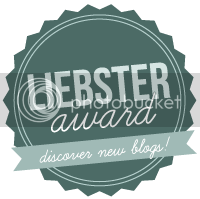