Amy Johnson Crow of No Story To Small has started a challenge of 52 Ancestors in 52 Weeks.
From her blog “The challenge: have one blog post each week devoted to a specific ancestor. It could be a story, a biography, a photograph, an outline of a research problem — anything that focuses on one ancestor. Not only should this get me blogging more, but also to take a deeper look at some of the people in my family tree.”

The focus of my blog posting today is Nancy J. Davis Ross. Nancy is my 2nd Great Grand Aunt. Nancy is an enigma that refuses to relinquish her secrets.

Nancy was born 25 June 1844, the fifth child of nine to Michael Davis and Hulda Rivers. A scarcity of records due to burning of the Courthouse and its  records during the Civil War presents a challenge for any researcher or genealogists.1 2

Publication of misinformation that seems to grow exponentially presents another problem. For instance:

Info: Harry Alexander Davis in his book "The Davis Family in Wales and America" made the following statement: "Nancy J. b 1845 md 1865 David Richard son of Eliza Davis and Benjamin Teal, 1st cousins: had 2 children in 1870." 3

This is not TRUE.

Nancy’s late marriage is another puzzle. I don’t believe a young lady waited until she was 26 years old to marry.

This is not true; but may be partially right. 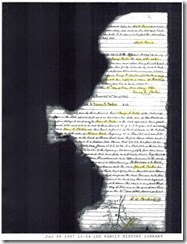 I submit these three comments as circumstantial evidence that Nancy was twice married;
1) During the Civil War, one deed book was snatched from the pile of books burned by Gen. Sherman’s army in March 1865. That book is on file in the Probate office of the Chesterfield County Courthouse. Within that book is a burnt land deed between George A. Parker to James K. Parker dated February 1861, named within the Deed is Nancy Parker. 7

3) Nancy is not listed in her parents household in 1860 Chesterfield Census.

Nancy is not with her parents confirming my theory that she is married and based on her age and the land deed is the Nancy Parker listed in James K. Parker household.

Nancy’s obituary provides no information on a previous marriage.

Obituary - Mrs. James Ross died at her home on Green Street last Tuesday morning at 6:30 o'clock after a long illness, which she had borne with Christian resignation. Mrs. Ross had attained the age of 75 years and had been a life long member of Zoar church. Before her marriage she was Miss Nancy Davis, and was raised in the Zoar section. She is survived by her husband and a large family connection. The body was laid to rest in the Zoar cemetery Wednesday afternoon. Many beautiful floral tributes attested the love and esteem in which this good woman was held by her friends. 8

If you have any information on Nancy J. Davis and her marriage please contact me by e-mail.